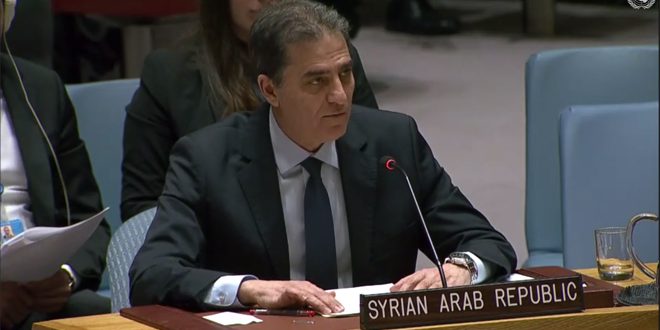 New York, SANA-Acting Charge de-Affairs of Syria’s permanent mission to the UN, Louay Fallouh, said on Thursday that Syria categorically rejects the draft resolution submitted by the so-called humanitarian co-penholders because it is totally far from the humanitarian purposes proposed in it.

Fallouh added in a speech at a UN Security council session that terrorism and the economic blockade imposed on the Syrian people, by countries that continue their intervention in Syria’s domestic affairs, hinder the aspects of solving the crisis and obstruct the elimination of terrorism completely.

He stressed that some Security Council members are governed by the methodology of hostility to Syria and its partners in the war against terrorism and their obsession is only pointing fabricated accusations to Syria and denying its efforts.

Fallouh called for putting an end to the aggravated piracy practiced by the US on the resources and revenues of oil and gas which belong to the Syrian State, not to any other side.

“Syria categorically rejects the draft resolution submitted by the so-called humanitarian co-penholders because it is totally far away from the humanitarian purposes proposed in it,” Fallouh said.

He added that the main, firm principle in the humanitarian work is protecting the national sovereignty for which UN Security Council resolutions, relevant to Syria, affirm.

The Syrian diplomat went on to say that the contexts of the draft resolution reveal the real incentives behind its submission, on top, escalating the atmospheres of hostility inside UNSC against Syria and targeting its basic role and center.

He added that Syria calls on the United Nations Office for the Coordination of Humanitarian Affairs (OCHA) to build up a balanced and professional relation with it and distance themselves from attempts of political polarization.

“Syria rejects the methodology of notifications and affirms that it doesn’t meet the minimum point of transparency, credibility and criterion of respecting the national sovereignty,” Fallouh said.

He called for putting an end to the suffering of the Syrian people which requires respecting Syria sovereignty, territorial integrity and supporting its efforts in combating the remaining of terrorism.

Fallouh also called for lifting the economic, coercive and unilateral measures imposed on Syria and ending the illegitimate presence of foreign troops on its territories.