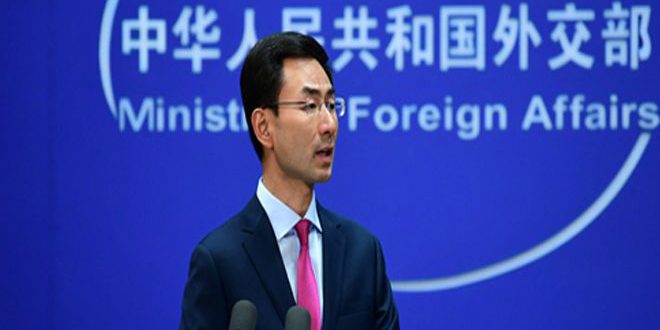 Beijing, SANA- Chinese Foreign Minister reaffirmed the necessity of the full respect of Syria’s sovereignty, and territorial integrity, asserting that any resolutions on the entry of humanitarian aid through borders must be approved by the Syrian Government.

In a press conference, the Foreign Ministry’s Spokesman Geng Shuang said that the cross-border humanitarian aid is a “special method that depends on certain conditions and it must be based on the full respect of Syria’s sovereignty, independence and territorial integrity as well as the views of the Syrian Government.”

Geng pointed out that his country voted against the draft resolution on humanitarian aid in Syria based on the objective bases of the issue and the basic interests of the Syrian people.

He expressed China’s rejection of the baseless accusations made by some parties in this regard and its call on these parties to think carefully about their words and actions after they have committed wrong actions and caused the suffering of the Syrian people.

The Chinese spokesman reiterated his country’s support for constructive efforts aimed at finding a political solution to the crisis in Syria as a way to improve the humanitarian situation in Syria.

Russia and China used the veto on Friday against a draft resolution at the UN Security Council on the transfer of humanitarian aid to Syria that exploits the humanitarian situation in it and violates its sovereignty.