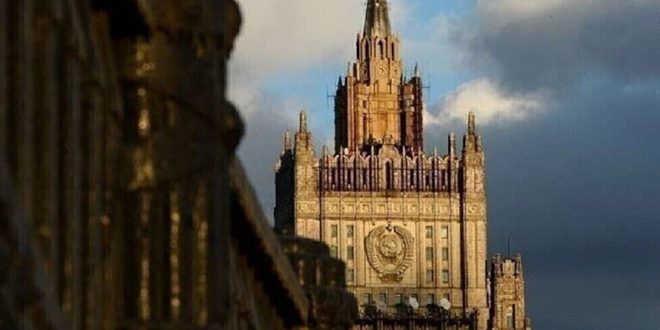 The Ministry said in a statement that “according to the international law, the humanitarian aid should be delivered in consultation with the receiving countries …and the Syrian Government had earlier officially requested from the UN to end the transborder humanitarian aid operations, and in framework of adhering to Syria’s sovereignty, independence and territorial integrity, the international community should take that into consideration and should the respect this call by the Syrian Government.”

The statement read that “Based on the above-mentioned reasons, the Russian side has prepared and put to vote a draft resolution that stipulates for extending the delivery of the humanitarian aid via the two border crossings in Idleb for only six months.”

“Our Western partners voted against our project guided solely by political interest instead of the needs of the Syrian civilian population,” the Russian Foreign Ministry said.

“It is obvious that they needed the Syrian transborder mechanism as an instrument of undermining sovereignty and territorial integrity of Syria, and not as a means of aiding those in need,” the Ministry said, indicating that the coercive have been imposed on Syria for the same purpose.

The Ministry noted that this issue impedes the process of allocating the required funding for the reconstruction in Syria, including the reconstruction of the houses, schools and water and electricity facilities which is “an important issue for facilitating the return of those who have been displaced due to terrorism.”

In its statement, the Russian Foreign Ministry slammed the measures taken by Washington for stealing the Syrian oil and imposing control on it and continuing its illegitimate presence on the Syrian territories.

The Ministry indicated that the U.S. which is leading a coalition under the pretext of fighting Daesh (ISIS) is “trading in the Syrian oil illegally in full view of the international community, thereby the U.S. and its allies are maintaining their unlawful military presence in Syria.”

“Not only are such actions a blatant violation of all norms of international law, humanitarian law and the UN Charter, they demonstrate from open disdain for sovereignty and territorial integrity of other countries, to politicization of strictly humanitarian issues, and profiteering off the needs of civilians while shameless plundering of the country’s natural resources is underway,” the ministry stressed.