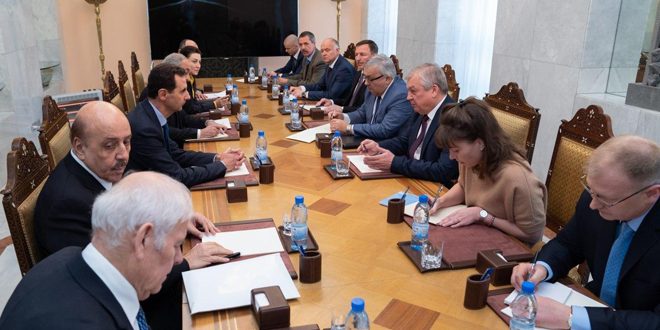 Talks during the meeting dealt with the situation in Aleppo and Idleb in light of the terrorist daily attacks on safe areas and the casualties among civilians.

Agreement was made on the necessity of operations carried out by the Syrian Arab Army, supported by Russia, to put an end to those attacks in those regions and protect the civilians from the terrorist organizations and their crimes.

Discussions tackled the political process, with the two sides underline supporting the work of the Committee of discussing the constitution away from any foreign intervention or any politicization practiced by some sides which could hinder its work or put obstacles in front of the continuation of its work.

The talks also dealt with the strategic ties that connect the two countries and the continued work by both sides to go ahead in developing and boosting them in all domains.