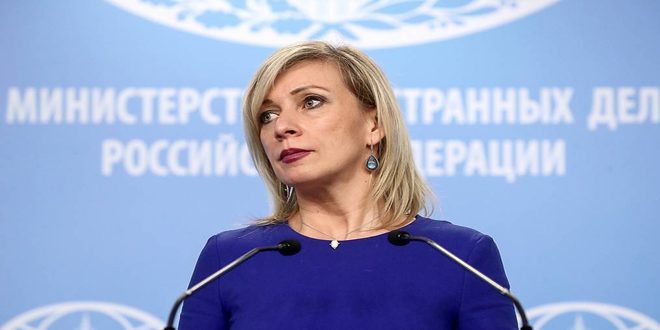 Moscow, SANA- Moscow affirmed on Wednesday that the reason behind the escalation of situation in Idleb area is Turkey’s non- commitment to its obligations, adding that the Israeli aggression on Syria is a factor of destabilization in the region.

RT quoted Russian Foreign Ministry spokeswoman, Maria Zakharova, as saying in a press statement in Moscow that the Turkish regime is responsible for the deterioration of the situation in Idleb area, as Turkey is not committed to its obligations under Sochi understanding.

“We see the reason for the current deterioration is due to Turkey’s chronic non- commitment under the Sochi memorandum of September 17, 2018, and the transfer of Turkey-controlled groups to northeastern Syria.” Said Zakharova.

She affirmed that Russia remains committed to the agreements reached earlier in the Astana formula and is determined to continue working to fully implementation of the agreement.

Meanwhile, Zakharova indicated that Israel’s air strikes on Syria don’t only represent a violation of the Syrian state’s sovereignty, but they also pose threat to the lives and safety of civilians.

Russian Defense Ministry: Situation is escalating in Idleb as Turkey enters arms and munitions to it

In this context, Russian Defense Ministry said that the situation in Idleb province is escalating as the Turkish regime enters arms, ammo, and armored vehicles to the province.

The Ministry said in a statement that Turkey’s non-commitment to its obligations is the reason behind the escalated situation in Idleb.

It added that the transfer of armored vehicles and weapons by Turkey via borders to Idleb deteriorate the situation there.