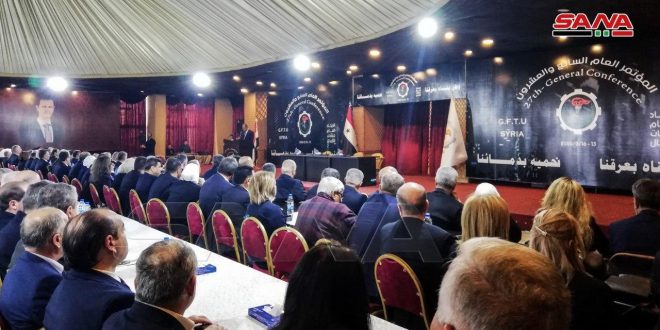 Damascus, SANA – The 27th General Conference of the Federation of Trade Unions (GFTU) concluded its work on Sunday by electing the Federation’s General Council and the executive office.

The participants in the conference affirmed the need to continue exerting all possible efforts and using all possible means to break the economic siege and the coercive unilateral measures imposed on the Syrian people. 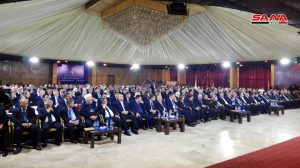 They reaffirmed the importance of carrying out the administrative reform project as soon as possible, improving the conditions of workers, and increasing the pace of the development process.

The participants also called for a wide-scale campaign on all levels to support the struggle of the Syrian people in restoring the occupied Syrian Golan and forcing the Israeli occupation forces to comply with the resolutions of international legitimacy regarding the Arab-Israeli conflict.

They saluted the people of Golan for their heroic struggle against the occupier and their adherence to their homeland Syria. 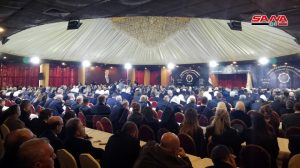 The participants reaffirmed the strong relations between the working class and its unions, and their solidarity under the leadership of President Bashar al-Assad, stressing the importance of supporting, reforming, and enhancing the public sector and solving all the difficulties it faces.

They reaffirmed the importance of supporting the unity of the global labor movement as well as the unity of the Arab workers, in addition to strengthening the role of the Global Federation in the struggle for the causes of workers around the world.

They reiterated the unlimited support of the Syrian workers for the Palestinian workers and people in combating the so-called “Deal of the Century,” demanding the world’s federations to pressure the occupation entity to implement the resolutions of the international legitimacy related to the occupied Syrian Golan, Palestine, and the occupied Lebanese territories.

The conference was held with the participation of 479 elected union delegates representing all the labor and production sectors, with delegations representing Arab and international labor organizations.