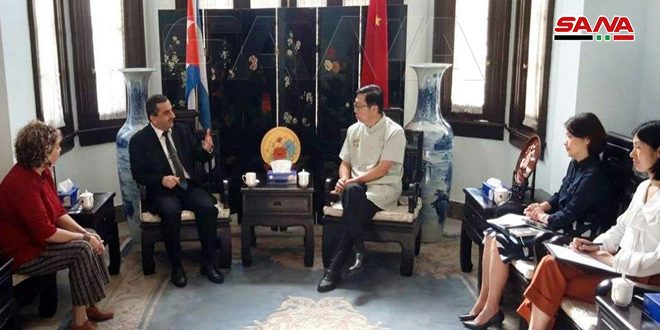 Havana, SANA- Chinese Ambassador to Cuba Chen Xi reaffirmed his country’s stance in support to Syria in its war against terrorism, underlining the necessity of respecting its sovereignty and territorial integrity.

During a visit paid by Syria’s Ambassador to Cuba Dr. Idris Mayya to the Chinese Embassy in Havana, Chen lauded the advances and victories achieved by the Syrian Arab Army against terrorism in the provinces of Aleppo and Idleb.

The Chinese Ambassador asserted that China stands by Syria in the reconstruction stage and it will provide all the possible help in this domain.

Chen expressed thanks for Syria’s stances in support of his country in the face of the coronavirus in a way that reflects the deep-rooted and strong relations binding the two friendly peoples and countries.

Ambassador Mayya, for his part, reviewed the triumphs achieved by the Syrian Arab Army in the provinces of Aleppo and Idleb, expressing appreciation at the same time for China’s stances in support of Syria at the international forums.

He asserted that Syria hopes that China will have an effective and significant role in the reconstruction of what has been destroyed at the hands of terrorists.